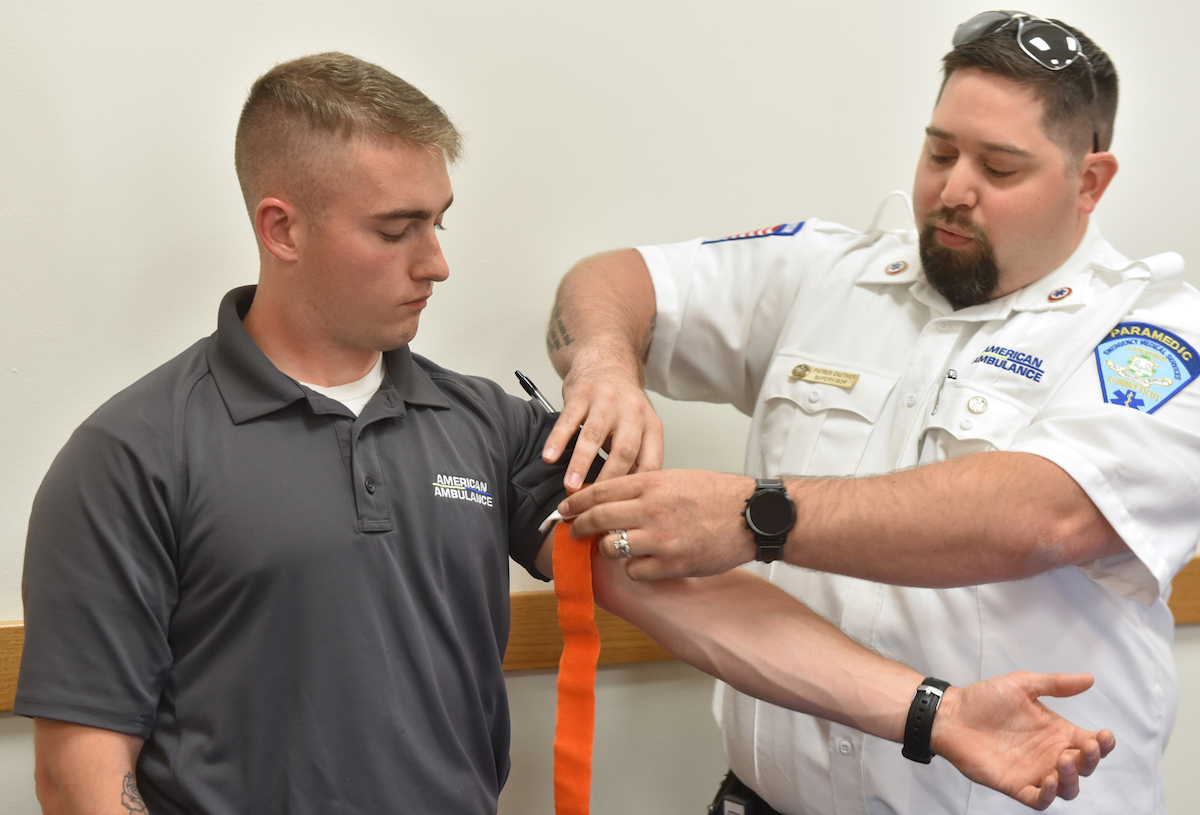 When Adam Ritchotte of Baltic suffered a deep knife wound to his groin, he immediately knew what needed to happen.

Having learned in combat training while deployed in Afghanistan how to stop bleeding from such a penetrating wound, he laid on his back and instructed his co-worker Sean Kelley to put his knee over the wound and push down as hard as he could. It was that action that saved Adam’s life.

“If Adam hadn’t known to tell Sean to do that, we would have nothing to talk about today,” said Gardner Lake EMT Cheryl Philopena, one of the first responders to the 911 call that day.

Philopena and everyone else involved in Adam’s treatment and recovery gathered Thursday, May 20, to celebrate his survival, and focus on the importance of bystanders knowing how to stop bleeding. The event took place during National EMS Week.

Called “Stop the Bleed,” it’s a national public education program that was first born out of a Connecticut tragedy, the Sandy Hook school shootings in 2012. Dr. Lenworth Jacobs, then director of the Trauma Institute at Hartford Hospital, was motivated by that event to create an education program to train bystanders in basic first-responder skills — bleeding control and the use of a tourniquet. That led to recommendations by the American College of Surgeons that became known as the Hartford Consensus, which led to the creation of “Stop the Bleed.”

American Ambulance paramedic Patrick Gauthier gave a “Stop the Bleed” demonstration at Gardner Lake Firehouse on Thursday after the recognition ceremony. (In the photo above, Gauthier, right, demonstrates how to apply a tourniquet on Charles Weinsteiger.)

If wounded, whether in a shooting or an accident, always call 911 first. If you see an injured person before first-responders arrive, taking these actions as prescribed by the federal Stop The Bleed program can save a life:

Compress: Find where the bleeding is coming from and apply firm, steady pressure to the bleeding site with bandages or clothing.

Tourniquet: If the bleeding doesn’t stop, place a tourniquet 2-3 inches closer to the torso from the bleeding. (The tourniquet may be applied and secured over clothing.) Pull the strap through the buckle, twist the rod tightly, clip and secure the rod with the clasp or the Velcro strap.

Compress Again: If the bleeding still doesn’t stop, place a second tourniquet closer to the torso from the first tourniquet. Pull the strap through the buckle, twist the rod tightly, clip and secure the rod with the clasp or the Velcro strap.