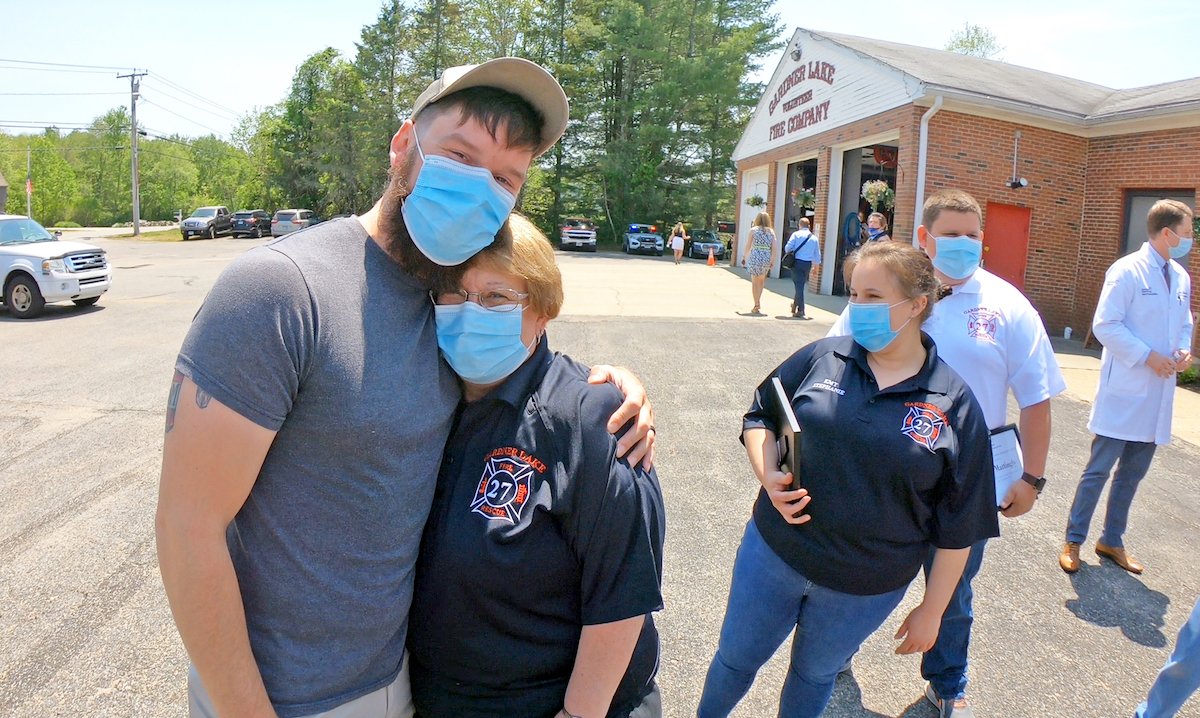 March 7 was a regular Sunday at Salem Prime Cuts. The retail shop was closed, and butchers Sean Kelley and Adam Ritchotte were in the back, working on a customer request.

Adam, 28, who lives in Baltic and has worked at the popular Salem butcher shop for three years, had a beef shoulder on the stainless steel table. With a 6-inch boning knife to separate the meat from the bone, he made one long, smooth cut from the top, all the way down toward him.

As he neared the bottom, the knife slipped and plunged directly into Adam’s groin, near his right hip. It went in almost to the hilt.

Without thinking, he pulled it out and clamped his hand over the wound.

“I have to go to the hospital,” he thought, and began making his way out the back door to the parking lot, where his colleague, head butcher Kelley, was grilling some chicken for their lunch.

Once outside, Adam paused to unhook his knife belt from around his waist. As soon as he removed his hand from the wound, blood shot out. A lot of blood. And it was coming fast.

“This is a slaughterhouse,” Sean said, “so you know what arterial spray looks like. I knew this was really serious.”

They yelled to coworker Sarah Hill to call 911. Then Adam laid down on his back on a nearby platform, and told Sean to climb up and put his knee on the wound. “Bear down as hard as you can,” he told his friend. Sean laced his fingers through the platform’s grating and, using all his strength, held himself there, his knee pressing down. Until help arrived.

Sarah actually called 911 twice, because those minutes felt like a lifetime. Arriving almost simultaneously were the Salem Fire Department and the Gardner Lake Fire Department EMTs and ambulance. American Ambulance paramedics were close behind.

Adam knew to tell Sean to use his knee for pressure from his Army training. Adam served in the infantry from 2012-15, including a six-month tour in Afghanistan. As part of his training, he learned how to stop the bleeding from a penetrating wound, which is often seen on the battlefield and more recently the mainstream public because of the nation’s slew of mass shootings.

Salem firefighter/EMT Ronald Prezch Jr. took over for Sean, keeping pressure applied while EMT Cheryl Philopena (pictured above with Adam) grabbed all the Quikclot wound-packing materials they had in the ambulance.

Cheryl, who turns 66 this summer, has been a volunteer EMT with Gardner Lake for 46 years. She was home cleaning the house when that Sunday call came in. As an EMT, she says, “When you’re on call, you don’t do anything. You don’t start anything, cook anything, bake anything, paint anything, because when that tone drops, you’ve gotta go.”

She credits Sean with being the first of many that day who saved Adam’s life.

“Absolutely,” she said. “If it weren’t for Sean, we wouldn’t have had anything to work with when we got there. Adam would’ve died.”

The two American Ambulance paramedics, Patrick Gauthier and Charlie Weinsteiger, were on scene after Adam was in the ambulance. Weinsteiger took over for Prezch, applying intensive pressure and adding even more clotting gauze. Gauthier started the IV and pain meds. And they kept talking to Adam, keeping him awake for the ride to Backus.

Weinsteiger is a trained combat medic in the Connecticut Army National Guard. He became a certified EMT in the National Guard, and has only been a paramedic since last December. On this Sunday, he was precepting with Gauthier, meaning he was still in the probationary period. He told all this to Adam, told him he was a “68 Whiskey,” and that put the patient visibly at ease.

In the ED, a Head’s Up for What’s to Come

Gardner Lake brought Adam to Backus Hospital, a Level 3 trauma center. Jeffrey Way, EMS Coordinator for Backus Hospital, said the ambulance will transport a patient to the nearest, most appropriate facility for the situation. Salem, Gardner Lake and American Ambulance all receive training, education and support from Backus, but work independently of the hospital and of each other.

Dr. Edward Gifford, a vascular surgeon who is on staff at both Backus and Hartford hospitals, was on call that weekend at Hartford. The on-call surgeon at Backus called Gifford to give him a head’s-up that they would be sending via LIFESTAR helicopter a patient who was suffering from “torrential bleeding.” Dr. David Coletti, a trauma surgeon, told Gifford he would require surgery to stabilize the patient before transport.

“There are very few patients who are injured so severely that cannot be temporarily stabilized and transferred to another hospital,” Gifford said. He knew that Adam’s bleeding was undoubtedly life-threatening.

While the entry wound was small — probably about an inch — the damage the knife did inside Adam was large. His common femoral vein was severed. This is the vein that carries blood out of the leg as part of the body’s circulatory system. Without it, all the blood that Adam’s femoral artery was pumping into his leg had nowhere to go.

Coletti brought Adam into the OR to do “damage control” surgery. He made an incision above the wound and tied off the femoral vein to stop the blood flow. This stopped the bleeding and stabilized Adam, but “now there was no way to get the blood out of his leg,” Gifford said. “When this happens, the muscles begin to swell and if the flow isn’t restored, the muscle starts to die.”

LIFESTAR was called and, in 45 minutes, Adam was at Hartford Hospital. Dr. Gifford was waiting for him in the OR there, along with Dr. Jonathan Gates, trauma surgeon and medical director of the Hartford trauma program.

“His leg was massive, and hard as a rock. We knew that if we didn’t release the pressure the muscles would die, and he could lose his leg,” Gifford said.

So while he made the incision below the knife’s point of entry to reconstruct the tied off vein, the trauma team began fasciotomies on both sides of Adam’s leg – one at the thigh and the other at the calf, to relieve that pressure. Three months later, Adam’s right leg looks like a road atlas of scar tissue. But it works, and he can walk, and drive, and he will eventually regain full use they believe. He expects to be back at work in June.

Dr. Gifford was faced with a tricky repair, because the common femoral vein is a large diameter vein, meaning there aren’t many options within the body from which to create a graft. And because the injury was caused by a butcher knife that had been actively cutting raw beef, he said, “I didn’t want to use a prosthetic because of the risk of infection we already had.”

An injury of this type wasn’t new to Dr. Gifford, who has been practicing for about four years. He did his residency training at the Harbor-UCLA Medical Center, a Level 1 trauma center in Los Angeles.

“We had a lot of penetrating wounds, a lot of gunshots and knife wounds,” he said.

Using that West Coast training, he decided to take a piece of a smaller vein, split it open and then sew two halves of it together to make it wide enough to reconstruct the severed vein in Adam’s groin. This is called a panel graft.

Meanwhile, the trauma surgeon made long incisions on both sides of the leg, relieving the pressure and allowing the muscles “to breathe.” Adam went to the Critical Care Unit at Hartford Hospital with open wounds on both sides of his leg. They wouldn’t go back to close up for a couple days.

When the swelling finally subsided, Dr. Akhilesh Jain, one of Dr. Gifford’s partners, took Adam back to the operating room to close up his large incisions on his calf and thigh. Typically in swelling this severe, a patient might require a skin graft to cover one of the open areas. But the team at Hartford Hospital used a technique they had learned recently from orthopedic trauma surgeons in online medical forums. This technique, known as “pie crusting,” allowed Adam’s skin to relax and come together, and ultimately for him to leave the hospital with a more normal functioning leg.

Adam’s story “is a great example of how you build a team to give each patient exactly what they need,” Dr. Gifford said. “You build a system that works so that when that call comes in, everyone is ready. You can’t underestimate what everyone did along the way. His co-worker. The first responders. The surgeons at Backus. Hartford Hospital. Each time, those involved recognized the seriousness of the injury, controlled the injury, and got him to us.”

Way decided to use this incident as a teachable moment for the community.

“Because this was such a severe bleeding incident, I decided it was a great opportunity to do some outreach and education,” he said.

He organized a “Stop the Bleed” class at Gardner Lake firehouse on May 20, inviting all the people who were involved in Adam’s case to attend as a reunion of sorts.

“It’s really infrequent that we see the patient after the recovery,” he said. “Usually our relationship ends at the hospital door. To put this together feels significant, because everyone had to work perfectly together for us to even be having this conversation about Adam. I’m proud of those who work under Backus’ supervision.”

Philopena, the Gardner Lake EMT, is looking forward to the get together. She estimates at least a dozen people are directly responsible for Adam being alive today.

“That’s absolute,” she said. “The stars all lined up for Adam that day.”

Adam, who is married with a 3-year-old son and another baby due in July, fully understands the scope of effort that went into saving him. He says he looks forward to seeing everyone in one room. He’s not back to work yet, but he has visited with Sean several times.

It’s good to have a coworker who saved your life, isn’t it?