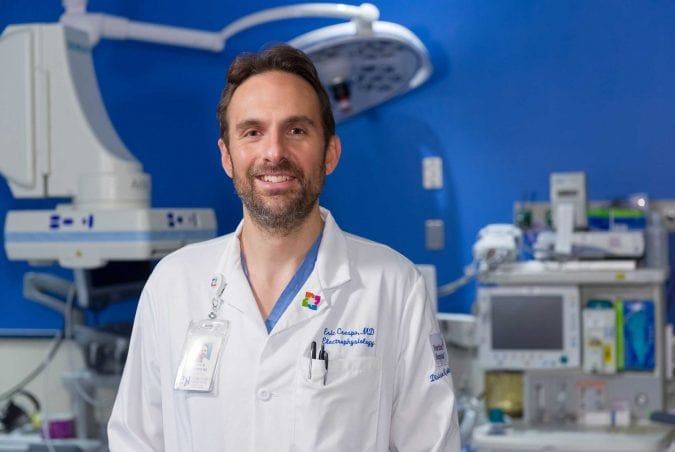 The Hartford HealthCare Heart & Vascular Institute’s Electrophysiology Lab at Hartford Hospital, which last year performed 1,300 procedures for more than 800 patients, knows what to expect from an aging population — more and more patients with heart-rhythm disorders.

An estimated 9 percent of people in the United States age 65 and older have atrial fibrillation, the most common type of heart arrhythmia (an abnormal or irregular heart rhythm). The Centers for Disease Control and Prevention expects that number to rise. Already, Hartford Hospital is feeling the effects.

“Demand for the procedures we do has increased substantially over the last several years,” says Dr. Eric Crespo, director of the hospital’s Interventional Electrophysiology Lab. “As the population ages, there are many more people who need pacemakers, defibrillators and treatment for atrial fibrillation.”

An expanded Cardiac Electrophysiology Lab, newly opened, anticipates an even greater demand. The expansion increases space for procedures by more than 60 percent and adds a dedicated, eight-patient suite for pre- and post-procedure care. This includes not only a third lab, but a redesign of the workspace — making care seamless for patients and doctors.

“One of the key reasons for this expansion is to make the entire process easier and more efficient for the parents, their families and the caregivers,” says Dr. Mark Marieb, system director of electrophysiology labs for the Hartford HealthCare Heart & Vascular Institute.

Previously, says Dr. Crespo, patients had their pre-op and recovery on the fourth floor while family members waited for their loved one on the fifth floor.

Patient volume at the Electrophysiology Lab is also increasing as more hospitals and physicians across the state refer their heart-rhythm patients to Hartford Hospital. To accommodate the increased volume, the program is adding clinicians and also offering new technology that promises patients safe and effective alternatives to existing treatments. In May, for example, Hartford Hospital specialists performed the first two cyroballoon ablations in the area (see video above), using a tiny balloon filled with coolant that’s deployed to the heart with a catheter to freeze the problem site causing an irregular heartbeat.

“Traditionally, for atrial fibrillation,” says Dr. Crespo, “we created lots of small scars [using  heat produced by radiofrequency energy] that could sometimes take four hours for a procedure. The cyroballoon uses extreme cold to freeze larger areas of tissue all at once, allowing for a more efficient, rabid procedure — in most cases, under two hours.”

Now, the best ablation technique is chosen based on each patient’s condition.

These are the types of advanced treatments the hospital’s Electrophysiology Program offers for heart-rhythm problems that aren’t resolved by medication. The team, in addition to implanting and managing cardiac defibrillators and pacemakers, has extensive experience and expertise in conventional radiofrequency ablation, a minimally invasive treatment that eliminates the source of an irregular heartbeat. The physician threads a tiny catheter into the heart to find and destroy — or ablate — the areas emitting abnormal electrical impulses that cause an irregular heartbeat

Crespo says that while simpler ablations may be performed at other hospitals, complex cases must be done at a tertiary care facility such as Hartford Hospital.

“The number of complex ablations we do has more than tripled in the last eight years,” says Dr. Crespo.

This is another factor driving the expansion, he says, because “complex ablations take longer and use more lab space.”

This summer, a fifth interventional electrophysiology physician will join the staff. More nurses are being hired for the lab, and eight nurses certified in intensive care are being recruited for the pre- and post-procedure areas.

The new arrangement will help the lab treat patients more efficiently by reducing wait times and hospital lengths of stay.

“We want to provide the best electrophysiology care we can to patients in a timely fashion,” says Dr. Zweibel. “This expansion will help us do that.”

For more information about the Cardiac Electrophysiology Lab at Hartford Hospital, click here.