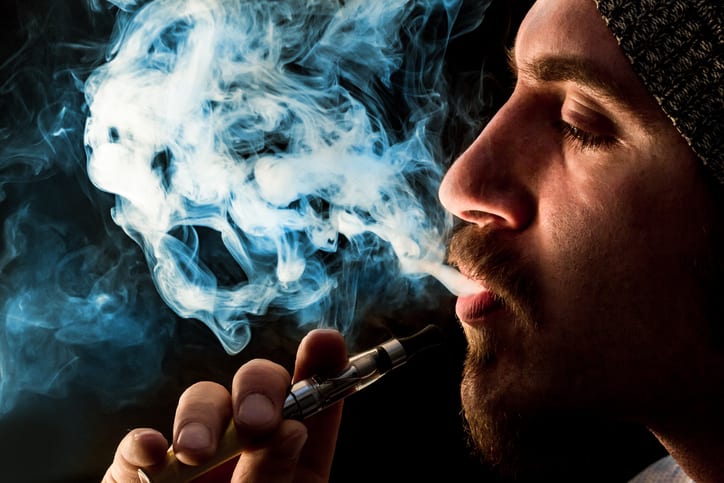 The plumes of smoke surrounding the heads of people who vape is a sign that they’re inhaling more of the damaging chemicals and heavy metals contained in the e-cigarette.

Dr. Phillip Simkovitz, a pulmonologist at St. Vincent’s Medical Center in Bridgeport, part of Hartford HealthCare, said the vapors emitted by e-cigarettes are not as harsh as smoke from a cigarette so users might be prone to inhale deeper and longer.

In Connecticut, 27 percent of high school students reported using e-cigarettes, which is 7 percent higher than the national average. This, Dr. Simkovitz said, is especially concerning after a recent Centers for Disease Control and Prevention report showing that 99 percent of e-cigarettes contain nicotine, which can harm the developing adolescent brain.

“When you see the pictures of kids vaping and the vapor coming out of them, the amount they use it’s really staggering,” Dr. Simkovitz said.

He called vaping a gateway drug given the addictive nature of nicotine. Many youth will go on to smoke cigarettes, a proven health hazard.

Besides nicotine, e-cigarettes contain damaging substances into the user’s lungs, including heavy metals such as lead.

“Cadmium lead may cause direct (lung) damage. The rest seem to cause damage by inflammation,” Dr. Simkovitz said, noting that such lung damage can lead to long-term scarring. “This is a new phenomenon for doctors. We don’t have a lot of years of people vaping to have long-term experience as to what are going to be long-term effects.”

People who vape often seek medical attention for a related illness that presents like pneumonia, Dr. Simkovitz noted. The symptoms include shortness of breath, coughing and even chest pain.

“Another concern is that adolescents are not equipped to recognize addiction or know how to get help for it,” he added about vaping.

For help quitting smoking or e-cigarettes, call 1.800.QUIT.NOW or go to www.CT.GOV.

Learn more about the causes, diagnosis, prevention and treatment of diseases affecting the lungs.