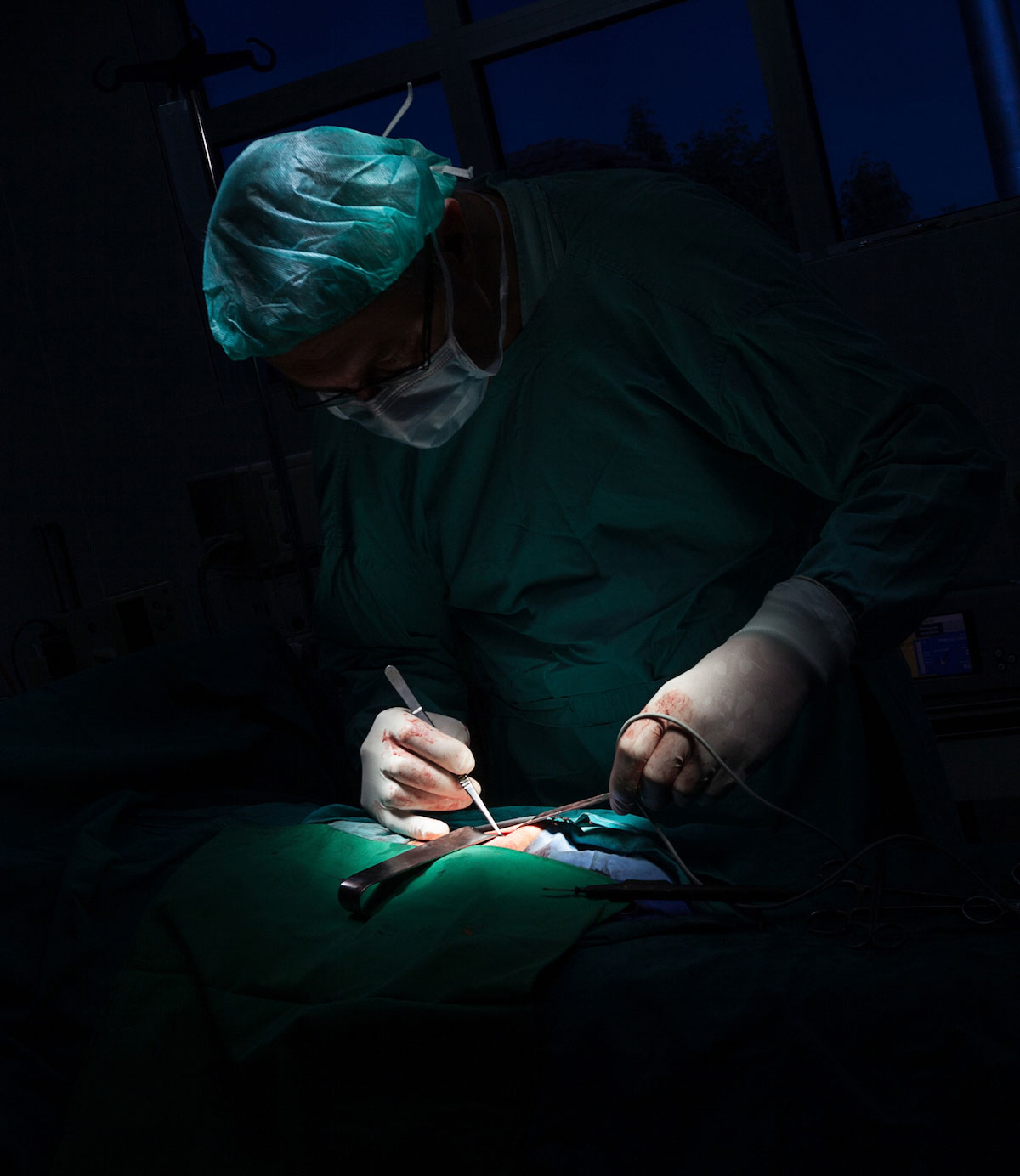 After surviving sepsis and a monthlong coma when his pancreas failed and his body started to shut down, Eric Pinsonneault wasn’t too worried about a follow-up surgery a year later for a hernia that had developed at the site of his original incision.

“I thought it would be pretty easy in comparison, and I knew I was in great hands,” he said.

The hernia – a weakness in the abdominal wall muscle allowing an internal organ to push through – was an uncomfortable and tender bulge on his stomach. But it was nothing like the pain he had felt when necrotizing pancreatitis had set in. Still, the hernia needed to be fixed. He returned to Hartford Hospital, where he’d been given a second chance at life after the 2013 ordeal.

Dr. Chike Chukwumah. a general surgeon, had opened the Wallingford resident’s torso with a large incision at that time to relieve the pressure of fluids collecting underneath his abdominal wall. The surgery had “shredded” his abdominal muscles, allowing the hernia to form. It was also Dr. Chukwumah, director of the Hartford Hospital Hernia Center, who operated on the hernia in 2014.

“We basically had to rebuild his abdominal wall,” Dr. Chukwumah said. “The abdominal wall is made up of eight muscles and three layers and we needed to reconstruct all of that.”

Before surgery, Pinsonneault, 47, participated in physical therapy to strengthen muscles in his torso so they could help him recover from the procedure.

“A hernia affects how you can engage your muscles and if the muscles are not engaged, they can atrophy,” Dr. Chukwumah said. “The physical therapists help the patient strengthen the muscles to ensure they are not overtaxed in recovery.”

In the operating room, with a host of other specialists – from the hospital’s cardiology, nephrology and infectious diseases teams, as well as plastic surgeons – because Pinsonneault’s case was complex, Dr. Chukwumah used his patient’s oblique muscles from the sides of the abdomen with layers of surgical mesh to rebuild the abdominal wall and repair the hernia. The surgery took nine hours and required a weeklong hospital stay to start the recovery. Physical therapy continued after surgery to address what he called “abdominal wall dysfunction” as a result of the hernia.

It’s an experience that rekindled Pinsonneault’s zest for life. While helping to raise his young granddaughter, he returned to college and last month received an associate’s degree in general studies at Middlesex Community College. In the fall, he’ll enroll in Southern New Hampshire University to pursue a bachelor’s in accounting.

Hernias, according to Dr. Chukwumah, require medical attention because they will not fix themselves or go away. Most hernias can be addressed with minimally-invasive and/or robotic surgery, but complex ones like Pinsonneault’s require open surgery.

“The location of the hernia can also dictate the approach we take,” he said. “Hernias can form near various organs in the body, such as an inguinal hernia in the groin or a hiatal hernia in the stomach.”

More than 500,000 hernia procedures are performed each year in the United States, making it one of the most common surgeries.

“Hernias can develop slowly or quickly, such as when you strain to lift something very heavy, or can be the result of abdominal surgery, as was the case for Mr. Pinsonneault,” Dr. Chukwumah said.

Common signs of hernias include: