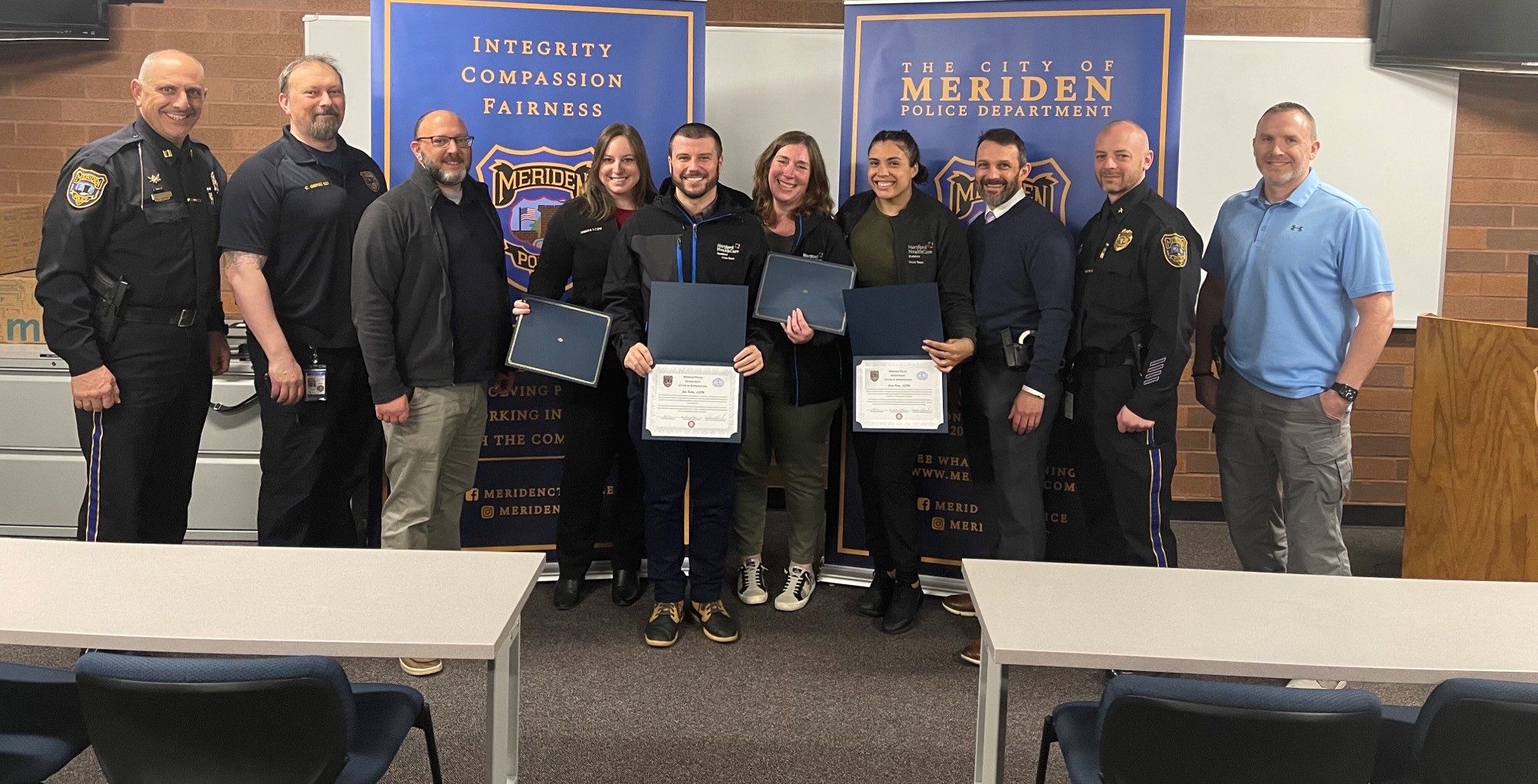 The Rushford Meriden Opioid Referral for Recovery team got a nice surprise recently when they were recognized by the Meriden Police Department for their contributions to the department and the community in a partnership that has continued to grow and strengthen.

“Through the Meriden Healthy Youth Coalition’s MORR and MERR (Meriden Early Diversion, Referral, and Retention) programs, as well as the Meriden Police Department’s CIT program, Rushford has been a valued partner in bringing services and support to those in our community struggling with addiction and mental health, and we look forward to expanding these programs and our partnership to best serve the community,” said the Meriden Police Department in a recent Facebook post.

“Since our initial partnership between the City of Meriden Health Department and Rushford to combat the opioid crisis through the development of the Meriden Opioid Referral for Recovery (MORR) project, we have realized that this public/private partnership has offered hope and recovery to many who are suffering from addiction,” said Deputy Chief Jerry Scully from the Meriden Police Department. “We have seen individuals who repeatedly overdosed on opioids get the treatment they need, often with the clinician visiting them right at the local hospital. Getting individuals into treatment frees up officers to concentrate on other police matters. This program gives officers the mechanism to make a difference not only in the life of the addicted person, but often their families as well.”

March was National Social Worker Month and the City of Meriden and the Meriden Police Department presented the team, including Sheri Hatfield, LMSW and MERR Clinician; Ciara Perez, LCSW, Mobile Crisis Clinician; John Potter, LCSW and MORR/MERR Program Manager; and Jessica Matyka, LCSW, director of crisis and community programs at Rushford, with letters of appreciation for working closely with the police department and being instrumental in the success of the partnership.

Matyka said it was a pleasant surprise to receive the certificates. “We thought it was a regular meeting, but then they had the awards for us,” she said. She said the partnership has been evolving over the last four or five years and has become a strong community partnership.

“We are able to partner with police when they are on behavioral health calls, either by arriving on scene after or utilizing a co-responder model to be dispatched directly with the officer,” she said. “We have seen better results and been able to connect individuals to care and treatment that they need.”

Detective Lt. George Clements, of the Meriden Police Department, said the partnership is important. “The police department is able to leverage clinical expertise and skills to bring broader and more robust services to the public,” he said.

The Meriden Opioid Referral for Recovery (MORR) program is funded by a four-year, $2 million federal grant from the Department of Health and Human Services Substance Abuse and Mental Health Services Administration (SAMSHA) and provides first responders with Narcan to reverse the effects of opioid overdose.

Deputy Chief Scully said in 2020 the partnership led to additional collaboration on the Meriden Early Diversion, Referral, and Retention (MERR) program. MERR is a diversionary program that gives officers an additional resource to use when an arrest may be avoided, and a qualified individual would be better suited to receive intensive mental health and/or crisis intervention treatment from Rushford’s clinical team. Officers make the initial referral and Rushford clinicians follow up with the individual in crisis and offer them additional mental health services.

The program expanded again in 2021, when Rushford clinicians began working out of office space at the Meriden Police Department on a part-time basis. Clinicians ride with officers and actively assist with the homeless, those in a mental health crisis and individuals struggling with addiction. Rushford provided officers with homeless care packages that include a blanket, hat, socks, hand warmers and other toiletries. Officers were able to hand those out on some of the most bitter nights.

“Officers have embraced this partnership, built on trust and mutual respect, and routinely contact Rushford clinicians even when not working out of the police department to respond to and assist with individuals in crisis,” Deputy Chief Scully said. “This collaborative outreach has closed the gap between those suffering from addiction and/or mental health crises by reducing the fear they may be arrested when seeking much-needed help.”