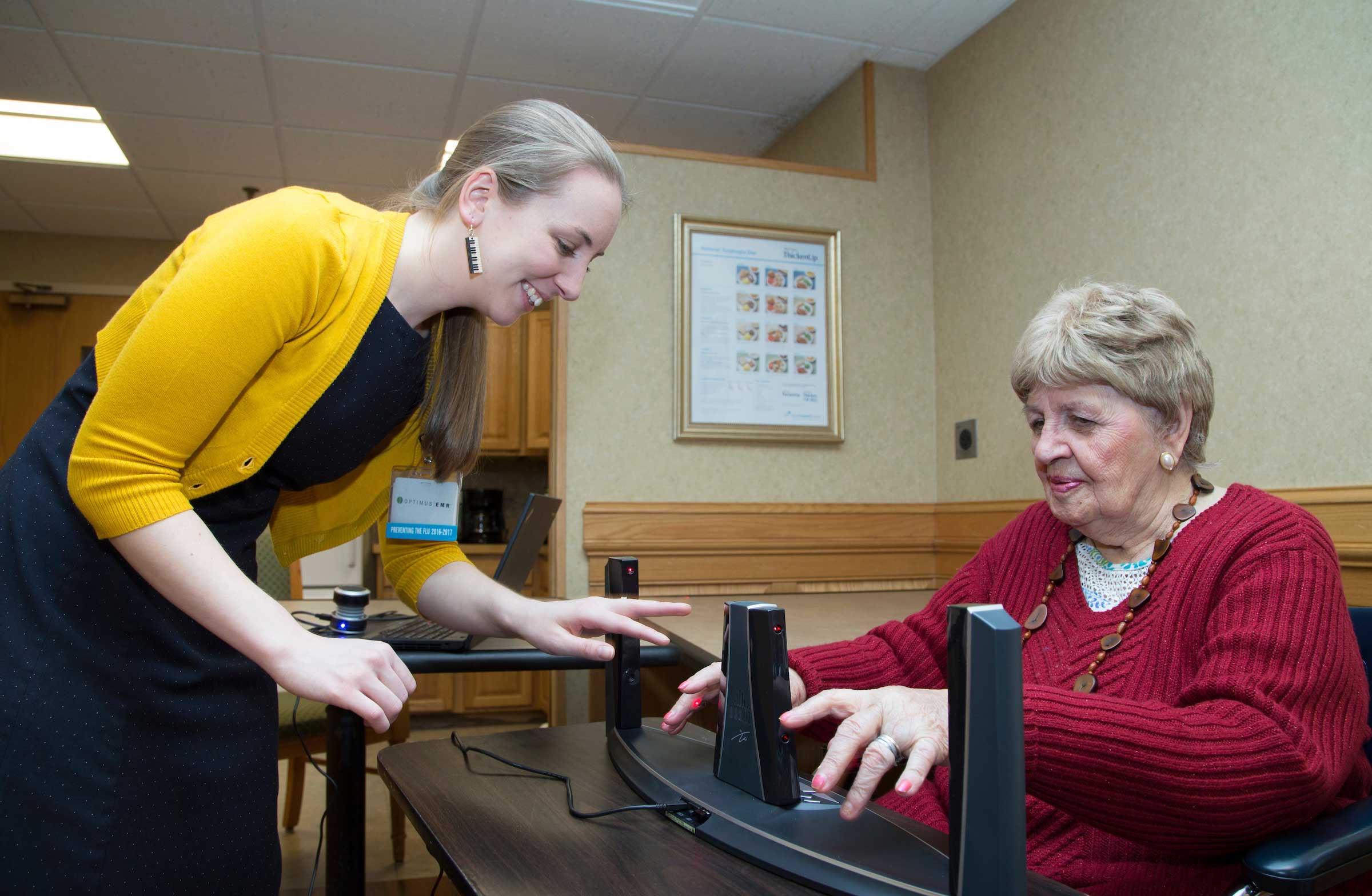 Fading eyesight prevents Marilyn Duncan, a Jefferson House resident, from playing piano as she did years ago or engaging in many activities. But when music therapist Laura Bunker introduced her to  Beamz, an innovative electronic instrument, Duncan, 93, eagerly raised her hand and waved it through the device’s laser beam, creating a drum beat and other sounds to accompany a favorite tune.

During a small group gathering, Duncan and three other residents smiled broadly as they were introduced to Beamz, which engages people of all abilities, promotes fine and gross motor skills and stimulates the brain through music and games. “I never saw anything like this,” said Jennie Pawlik, a resident who had been playing “Edelweiss” on the keyboard just a few minutes before.

Bunker encouraged the women to experiment with Beamz, as she changed the instrumentation and musical style on her laptop. This new technology is just one aspect of the diverse music therapy program under Bunker’s direction. Since she was hired in September to lead the two-year grant-funded initiative, she is rarely seen without her acoustic guitar. Throughout the day, she brings music to residents and rehabilitation patients.

“Residents have a wide variety of diagnoses and music therapy can be a good complementary treatment” she said. “The goal is to improve the quality of life.”

The results have been remarkable, said Susan Vinal, executive director of Jefferson House, a department of Hartford Hospital that offers short-term/outpatient rehabilitation, skilled nursing and palliative care. She has seen how music therapy has reached residents who have been uncommunicative, sparked memories and brought people together to sing.

“Music evokes a positive attitude that follows them throughout the day,” Vinal said.

According to WebMD, health benefits associated with music therapy include:

Bunker, with her guitar and piano, offers individual and group music therapy sessions. She has formed a choral group open to residents and staff that presents several concerts each year. Residents even wrote a song with her guidance. During a recent session, participants took turns drumming on the GarageBand app (using an iPad) and reading music on a virtual sheet music site. Vinal said nursing staff will call Bunker if they know a resident may become anxious or agitated when facing a stressful situation. Often it takes only a minute or two for the person to be soothed by a favorite tune.

Cindy Duncan, whose mother and father live at Jefferson House, said she has seen music enhance life for her parents and others. “Music is wonderful. It brings so much happiness and engages everyone,” Duncan said as she watched her mother experiment with Beamz.

“Music touches people in different ways,” Bunker said. “My goal is to provide opportunities to reintroduce residents to something they love and give them a way to express themselves and make choices. A familiar song can be a wonderful starting point for bringing back memories and what’s meaningful for them. There’s always a song that is meaningful for each person,” she said.

For more information about music therapy at Jefferson House,  at 1 John H. Stewart Drive in Newington, call 860.667.4453 or click here.