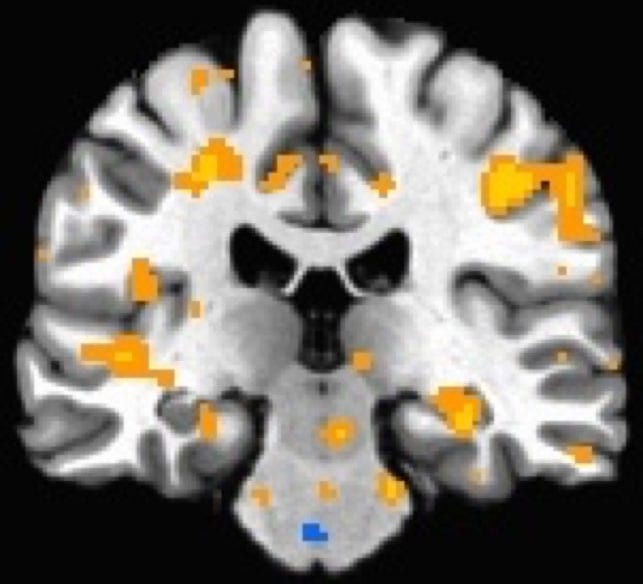 From the control room of the functional MRI at the Institute of Living’s Olin Neuropsychiatry Research Center, Dr. Alecia Dager watches the monitor for signs of activity in the portion of the brain that controls memory, curious as to how the drug impacts this process. (In the image above, the orange areas on a brain scan show regions where marijuana users showed less brain activity than nonusers while trying to recall information.)

It’s the focus of research the research technologist conducts at Olin, recruiting participants aged 18 to 22, some of whom admit to being heavy marijuana users and others who do not use the drug, to compare function in the brain’s frontal lobe and hippocampus, where memories are made.

“My primary hypothesis is that marijuana users will show poor memory function and less brain response in the hippocampus during memory tasks,” Dr. Dager says. “For this, there would have to be changes in the neurochemicals.”

The functional MRI, or fMRI, examines neurochemical activity in the brains of participants in her Marijuana Memory Study, fueled by a $658,940 grant from the National Institute of Drug Abuse. After launching in 2015, the study will run through June 2019 and enroll 72.

“I’m hoping this will give us a better understanding of the memory dysfunction in marijuana users,” Dr. Dager says. “I’m using the spectroscopy to better understand it and find better treatments.

“Ultimately, I want people to know the effects. With marijuana’s legalization, people’s perception is changing and they think it’s harmless. It’s becoming more acceptable and usage is increasing.”

She chose to focus on younger people because their brains are still developing and marijuana could permanently affect its function.

“We know peak marijuana use is at that age with 20 percent saying they had used in the previous month,” Dr. Dager says. “It’s also the time when the processes that help the brain be more efficient, plan for the future and be responsible are developing.”

Cognitive ability is critical to everyday functioning, especially for college students, which prompted her to zero in on the brain’s ability to make and store memories.

“Memory function is the most consistently observed cognitive deficiency from marijuana use,” she says, adding, “Some research shows that if adults stop using, their memory returns. It’s not clear if that happens in young adults. It may have a longer lasting impact on them.”

Study participants are given a fMRI scan while memorizing information. They are then asked to remember the information while Dr. Dager watches the scanner for breakdowns in brain function.

The fMRI also examines the brain’s neurochemistry, specifically metabolites critical to various brain processes in the frontal lobe and hippocampus. She hopes to link their function to the presence of THC and CBD, chemicals found in marijuana.

For more information or to participate in the Marijuana and Memory Study at the Institute of Living’s Olin Neuropsychiatry Research Center, contact Chelsea Meagher at Chelsea.meager@hhchealth.org or 860.545.7106. To visit the Olin website, click here.