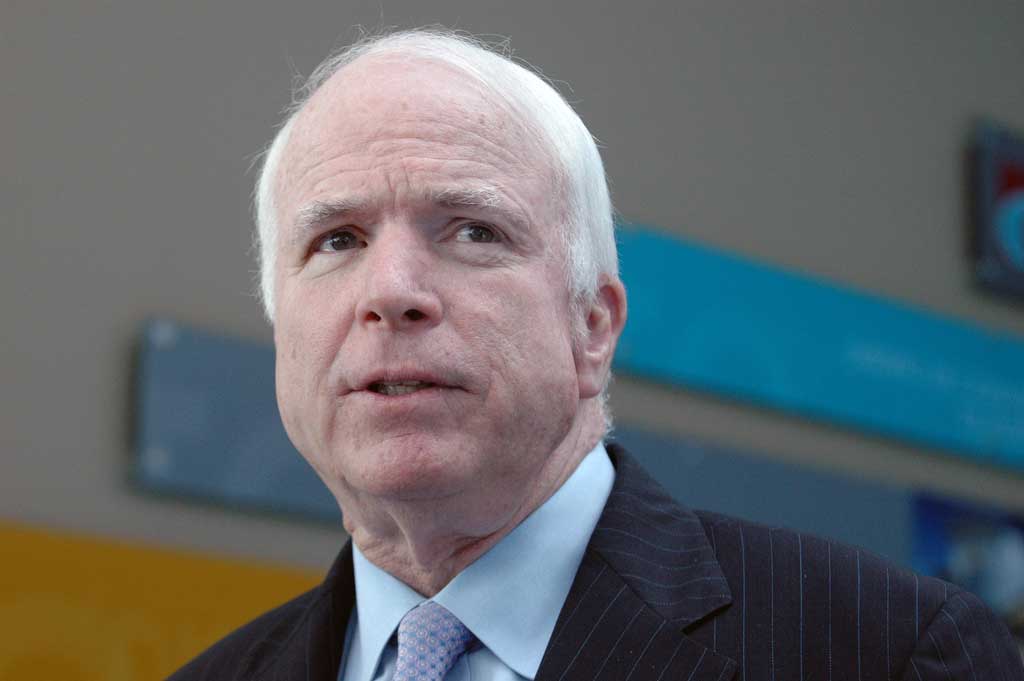 Rambling, often incoherent questioning by Sen. John McCain (R-Ariz.), diagnosed in late July with a lethal brain cancer known as glioblastoma, during the Senate Intelligence Committee hearing the previous month now must be considered a possible early sign of his illness.

“I am not sure as to the exact size or location of his tumor/hemorrhage,” says Dr. Paul Schwartz, a neurosurgeon at Hartford HealthCare’s Ayer Neuroscience Institute, “but in general rapidly expanding lesions — such as a fast-growing tumor or a hemorrhage into the tumor — in the frontal lobes can cause the sort of confusion that he seemed to have during the questioning.”

McCain’s questioning appeared to confuse James B. Comey, the former FBI director, during testimony before the committee. Viewers, and Twitter users, also noticed.

Glioblastoma, which killed Sen. Edward Kennedy (D-Mass.) and Beau Biden, the son of former vice president Joseph Biden, is an incurable cancer. The American Brain Tumor Association estimates about 12,400 new cases this year. Risk increases with age, though a patient’s age does not necessarily shape the treatment.

“Treatment is often determined more by overall health of the patient than absolute age,” says Dr. Schwartz. “Standard therapy — chemotherapy and radiation — is offered to all unless there are medical comorbities that preclude chemotherapy. Some clinical trials, though, are not available to 80-plus-year-olds.”

Hugh LeMasurier, 77, a volunteer at Windham Hospital, was diagnosed with glioblastoma in 2013. LeMasurier, a United Technologies retiree, said he did not detect any symptoms but friends, family and coworkers noticed alarming behavioral changes. A subsequent MRI revealed a tumor the size of a golf ball in his right frontal lobe.

“When I asked the neuro-oncologist what the prognosis was,” he says, “she said, ‘You better get your affairs in order because you’ve got 18 months to two years [to live].”

Doctors discovered a blood clot above McCain’s left eye last week during a routine physical exam. (McCain is 80.) Lab results after the clot was surgically removed by doctors at Mayo Clinic Hospital in Phoenix confirmed the cancer that forms in the tissue of the brain and spinal cord. Glioblastoma is a grade IV astrocytoma formed from the star-shaped cells in the brain’s supportive tissue.

This type of cancer, like others, is treated with surgery, followed by radiation and chemotherapy. McCain’s tumor is almost certain to grow back within a year. If that happens, doctors will once again remove the tumor.

A tumor such as McCain’s can grow rapidly, says Dr. Schwartz.

“Up to 1 or more centimeters a month,” he says, “though sometimes it develops more slowly. It’s often asymptomatic until it reaches a critical ‘eloquent’ brain structure or until it exceeds 2-3 centimeters in size. Eloquent areas include motor or sensory areas as well as speech areas.

Symptoms can include seizures, blurred vision, headaches and confusion.

“The patient experience,” says Dr. Schwartz, “is determined almost exclusively by the location of the tumor and its growth rate.”

The median survival rate, with treatment, is 12 to 18 months. (Half of patients live longer, half die earlier.) Kennedy announced his diagnosis in May 2008 and died, at 77, in August 2009. Beau Biden, Delaware’s former attorney general, was diagnosed in August 2013. He died in May 2015 at 46. Dr. Schwartz says a “handful” of patients survive 20 or more years.

“We have increased the number of long-term survivors (more than 5 years) to approximately 18 percent to 20 percent,” he says, “with a combination of aggressive surgery, chemotherapy, radiation and newer technologies.”

Among the new technologies, available at Hartford HealthCare: A Novocure’s Optune mesh-type helmet that pulses the tumor bed with alternating electrical fields. Optune, approved by the Food and Drug Administration in 2015, is among the few treatments that can extend the life of patients with brain tumor’s like McCain’s.

“John McCain is an American hero and one of the bravest fighters I’ve ever known,” said  former President Barack Obama in tweet. “Cancer doesn’t know what it’s up against.”

The hope in Washington, and around the country, is that McCain’s body can summon the toughness to pause the advance of cancer and somehow upend the odds.

“They can’t really tell exactly” how long a glioblastoma patient will live, says LeMasurier. “That’s based on statistics. It’s up to the individual.”