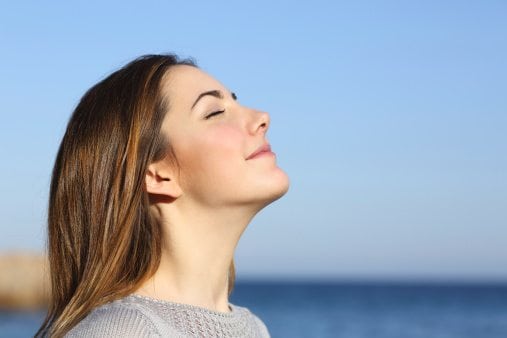 For Rhodes, a 71-year-old retired advertising executive from Danbury, transcranial magnetic stimulation (TMS) at the Institute of Living (IOL) is quite literally a lifesaver.

“I had a corner office in New York City, a wonderful marriage to a saint and two great children, yet I overdosed on Xanax and alcohol in February 2009,” she said.

As a teen, she swallowed fistfulls of aspirin and suffered debilitating bouts of sadness for years because it was unacceptable to talk about depression. As an adult, feelings she should be happy battled a darkness that left her sleeping 16 hours a day. Medication numbed her to everything, a feeling she also disliked.

“Then, my sister saw an ad for treatment without medication,” Rhodes said. It referred to TMS, a treatment for major depressive disorder resistant to other treatment. Approved for just a year at that time, TMS was first available at the IOL but not covered by most insurance. “Mine denied it twice but I fought.”

Although Rhodes worried about the noninvasive neuromodulation treatment, which delivers MRI-strength magnetic pulses, she was willing to try anything and started in 2010.

“I thought what have I got to lose other than my life?” she said.

Forty-minute treatments are initially conducted for up to six weeks, each delivering the 3,000 pulses to the brain’s left prefrontal cortex, which is linked to depression. The pulses, according to Dr. Joanna Fogg-Waberski, director of geriatric psychiatry and the Center for Interventional Psychiatry at the IOL, produce small electrical currents in the brain that activate cells thought to release neurotransmitters. Within 24 to 36 hours, the darkness stops.

“Once the depression lifts, you have a greater feeling of hopefulness,” said Rhodes, who wrote “Three Thousand Pulses” about her journey.

Two in three patients will feel at least somewhat better after TMS, and one of them will find complete relief. The effect is not permanent, though, and Rhodes said patients must monitor their symptoms, calling for refresher sessions when needed.

Signs she needs treatment include uncontrollable ruminations about deceased people, being weepy and agitated, and feeling hopeless, like she’s sinking.

“I have to monitor my symptoms or I’ll be in a pickle again,” she said.

Today, more than 2.5 million people receive TMS at more than 800 U.S. centers, but she said stigma persists as does confusion about the treatment. People, according Rhodes, confuse it with electroconvulsive therapy (ECT), a more invasive procedure which delivers electrical currents to the whole brain, triggering brief seizures and changes to the brain chemistry that can reverse symptoms of some mental health conditions.

Coverage changes by health insurers Anthem Blue Cross Blue Shield, Cigna and Aetna has recently made TMS more easily available, too. Patients with major depressive disorder who have shown no improvement on two different medications can now be considered.