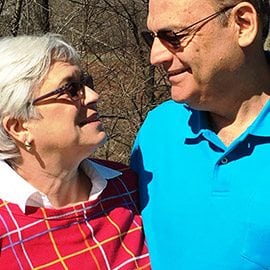 Dr. Tony Colandrea and his wife, Joan, well up in unison when they think of what might have been. What could have happened if the family of a man who died too young had not donated his organs last September.

For the 64-year-old Rocky Hill dentist who fires off one-liners with the timing of Groucho Marx, this is serious. Without the heart that doctors transplanted to replace the failing one in his chest, Colandrea might not be awaiting the birth of his second grandchild or looking forward to next winter in Florida, where he plans to get back on his bicycle and ride.

He knows he is one of the lucky ones. On any given day, 3,000 people in the U.S. are on a waiting list for a heart transplant, according to the National Institutes of Health. And each year, only about 2,000 donor hearts become available.

April is National Donate Life Month and Colandrea is telling his story to put a face on the gift of life.

A pediatric dentist in practice with his daughter, Katherine, Colandrea had just finished lunch in his office on March 3, 2015 when he felt a twinge near the top of his left lung. He felt a little tired too, and thought he might be coming down with bronchitis. He had a strong family history of coronary artery disease and had a heart attack ten years earlier, but this did not feel like a classic cardiac event.

Doctors at Hartford Hospital tried everything, but his heart was barely beating. Colandrea had suffered extensive damage to his left ventricle, the chamber of the heart responsible for pumping blood to the organs. After four weeks in the intensive care unit, he was told he would need a heart transplant.

Doctors surgically implanted an LVAD, a battery-operated mechanical pump that helps the left ventricle pump blood to the body. And the Colandreas went home to wait. They were told it could be two or three years before a compatible heart became available.

Colandrea’s recovery has been smooth and he is back at work part-time, while keeping active with daily cardio workouts. The father of three grown children wants to wait until the right time to contact his donor’s family, but he is already composing the thank-you note in his head.

“I’m going to thank them for the generous donation,’’ he said in a moment of reflection. “That out of a tragedy arose life.’’