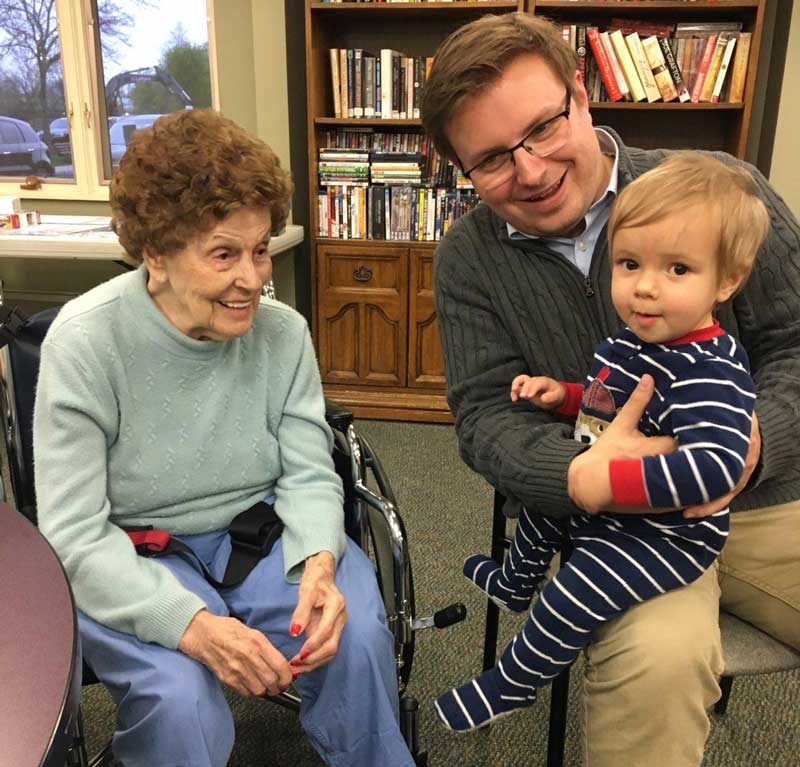 The Dixieland jazz that filled the halls and courtyard at Jefferson House on June 13 was delivered with love in celebration of a resident’s 98th birthday. This wasn’t just a musical performance for Berlin musicians Matt and Atla DeChamplain; it was a demonstration of love and musical traditions deeply rooted in their family.

As the ensemble performed in the courtyard, Matt’s grandmother, Florence Deschamplain, listened from the other side of the window while staff and residents could also hear the music via live stream throughout the community.

Mrs. Deschamplain, who moved to Jefferson House at 1 John H. Stewart Drive in 2016, was serenaded by Matt on piano, Atla on vocals and an ensemble with music from the era she was born including “Three O’Clock in the Morning” and “I’m Gonna Sit Right Down and Write Myself a Letter” capped off with “Happy Birthday to You.”

Matt DeChamplain said his relationship with Jefferson House began more than 20 years ago when he was in sixth grade. He was just learning how to play piano by ear and would perform during the Saturday lunch hour which allowed him a chance to hone his skills in a “safe” environment.

Now he is delighted that he can continue building memories there with his “Nana.” “Our family is very musical so naturally when we visited her at Jefferson House, we would go to the piano and play and sing,” he said. Those visits stopped during the pandemic. “So especially in the light of her birthday, I wanted to do something special for her and hoped this would bring her and other residents joy.”

Mrs. Deschamplain is a native of Rhode Island where she met her husband Norman at Kaiser Shipyard in Providence. In 1955, they moved to Hartford and later, Farmington, where they raised their two children, Norma and Raymond. She worked at Aetna insurance as a keypunch operator and then Pratt & Whitney/Chandler Evans when she entered the new field of IBM computers.

Music was always the life blood of the family, first, thanks to Norman who was a singer as well as a welder and contractor, and later through Raymond who forged his own musical career. The couple, who was married 60 years, also lived in Wethersfield and Florida. Matt holds dear many special childhood memories of his grandparents such as eating fresh raspberries out of the garden, pancake breakfasts and Christmas mornings listening and singing to a player piano, which is one of his passions.

It was music that actually brought Matt and Atla together when they met in their high school years at the Greater Hartford Academy of Performing Arts. Matt is well-known in the jazz field having performed at the Monterrey Jazz Festival, New York’s JVC Jazz Festival, Jazz at Lincoln Center and many other venues. He has toured extensively, performed with other ensembles, and can be heard on many recordings including “Pause,” a collaboration with his wife. He is on the faculty of The Hartt School (of music) at the University of Hartford and has held multiple other academic positions. Atla is on the faculty of Western Connecticut State University, writes a blog for jazz vocalists and has performed extensively with various ensembles.

For the birthday performance they were accompanied by the ensemble Tom Boates (trombone), Noel Koletsky (clarinet), Lou Bocciarelli (bass) and Tom Palinko (drums). Ten family members, including two great-grandchildren, gathered in the courtyard for the concert, each taking the time to offer their loved one happy birthday.

“I have many great memories,” Matt said. He may have added to that list by performing for his grandmother on her special day.