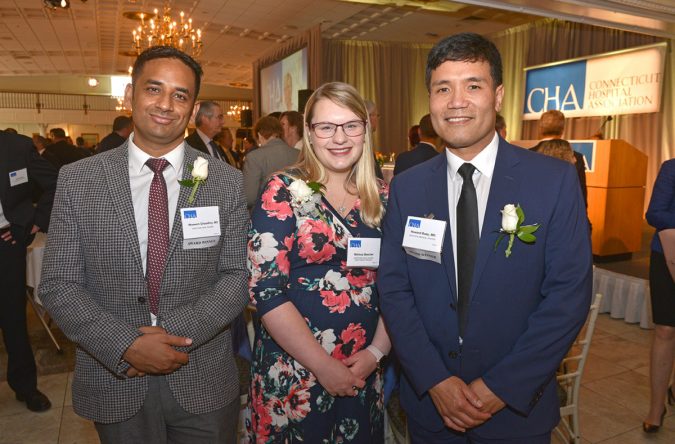 One Healthcare Hero rescued a paralyzed man and his wife from flood waters, two parlayed personal heartbreaks into better care for patients, three traveled overseas to bring medical services and healthcare knowledge to the underserved, and an entire hospital became heroes during a tragic incident.  These are just some of the stories of the 2019 Healthcare Heroes.  Each year, CHA recognizes an inspiring and committed group of individuals from across the state who embody the best in their profession.  The following Healthcare Heroes will be acknowledged at the 101st CHA Annual Meeting on June 20, 2019.

Melissa Beecher has been a nurse at The Charlotte Hungerford Hospital Maternity Center for nine years. Just over a year ago, Ms. Beecher and her husband suffered the loss of their son, Cameron, at birth. Ms. Beecher’s positive nature helped her turn this devastating and life-changing event into a way to assist and comfort other families who are experiencing the same tragic situation and heartbreak of losing an infant.

Ms. Beecher learned of the Cuddle Cot system, a cooling device and bassinette, developed in the United Kingdom and brought to the U.S. in 2013. This effective system allows families to spend extra time with their baby by regulating the child’s temperature after a stillbirth. That gives angel parents the choice of extending their bonding time with their child as they begin the complex process of grieving their loss. Both her own personal experience and her knowledge as an OB nurse gave Ms. Beecher the incentive to take action. She was able to channel her grief to help others by raising money to purchase a Cuddle Cot for The Charlotte Hungerford Hospital, as well as one for another local hospital.

At The Charlotte Hungerford Hospital, the most difficult journey of loss and healing for parents who lose a child at birth can now start with family memories, which are made possible by Ms. Beecher’s thoughtful generosity in the face of her own sorrow. The hospital is grateful to Ms. Beecher and her family for their selfless act of kindness in donating the Cuddle Cot to comfort angel parents. CHA’s Healthcare Heroes award was developed in 2002 to celebrate the invaluable contributions of healthcare workers, both to their field and to the community at large. Now in its 17th year, the presentation of the Healthcare Heroes awards has become a highlight of CHA’s Annual Meeting.

Dr. Boey has been heeding the call to heal impoverished populations for more than a decade by bringing specialized surgeries to patients in Ecuador. His inherent humanitarian spirit moves him, literally 6,000 miles round trip a year, to care for children and adults who need head and neck surgery, but who barely have access to basic medical services.

In the last 15 years, he has performed more than 400 procedures. A board-certified otolaryngologist, Dr. Boey specializes in robotic surgery and head and neck cancers at MidState Medical Center. In Riobamba, Ecuador, which is hours by car from the country’s capital, Dr. Boey primarily performs surgeries on children with deformities such as cleft lip or palate.

He travels with a contingency of colleagues from across the country that he’s assembled over the years, including general surgeons, anesthesiologists, and women’s health specialists. Through generous donations and a strong relationship with Partners for Andean Community Health, a clinic was built to accommodate the needs of the indigenous people. Dr. Boey performs his surgeries and follows up with his patients in this not-for-profit clinic, which houses a primary care service and two surgical suites.

Local newspapers, radio stations, and television programs announce Howard and his team’s arrival in advance. Rural doctors often refer patients who need expert care to the clinic. In the one week each year that he practices in Riobamba, Dr. Boey performs 25 to 30 procedures. Dr. Boey is a kind and thoughtful physician who carries the sentiment of his Ecuadorian patients when he’s practicing medicine in Connecticut.

The history of his travels translates into compassionate care in every exam room. CHA’s Healthcare Heroes award was developed in 2002 to celebrate the invaluable contributions of healthcare workers, both to their field and to the community at large. Now in its 17th year, the presentation of the Healthcare Heroes awards has become a highlight of CHA’s Annual Meeting.

The moment Dr. Chaudhry examined a woman whose veins were protruding, filled with patches of yellow and red bumps because of her high cholesterol, he knew he was far, far away from his Hartford office.

Dr. Chaudhry was in Amman, Jordan, as part of a team of 39 specialists offering free care through a mission trip organized by the Syrian American Medical Society (SAMS). The six-day trip was his first, but it will not be his last. Although he grew up in the U.S., Dr. Chaudhry’s family had emigrated from the Middle East, and he feels a responsibility to share western medicine, supplies, and techniques with people there. Of the woman with “eruptive xanthomas” as a result of high cholesterol, he said, “We take things for granted. I had never seen anything like this before in my life. You don’t see this sort of thing in real life in clinical practice in America.” The woman was just one of about 150 patients he and his partner cardiologist saw over the six days. The patients were mostly women and children, Syrian refugees, affected by the war in the Middle East.

Waking at 5:00 a.m. each day, Dr. Chaudhry would fill a box with cardiology medications, grab a portable echocardiogram machine, and board a bus to a makeshift clinic close to the Syrian border two hours away, where he’d see patients non-stop until 5:00 p.m. One night during dinner back at his hotel, he received a text message from a doctor at the refugee camp about a young woman having a heart attack. He and his colleagues had her transferred so interventional cardiologists on the SAMS team could insert a stent in her heart, a procedure that saved her life.

Dr. Chaudhry not only plans to continue participating in humanitarian work, he has been calling on friends and colleagues to volunteer. He has also pledged to raise funds to provide surgery for two children he saw in Jordan with ventricular septal defects.

For Dr. Chaudhry, the volunteer work dovetails with his personal philosophy, adopted from a senior physician friend. He said, “There are three stages in a physician’s life – learning, practicing, and giving back to make a difference.” CHA’s Healthcare Heroes award was developed in 2002 to celebrate the invaluable contributions of healthcare workers, both to their field and to the community at large. Now in its 17th year, the presentation of the Healthcare Heroes awards has become a highlight of CHA’s Annual Meeting.