Jordan Mission Trip: ‘Never Seen [Medical Conditions] Like This Before’ 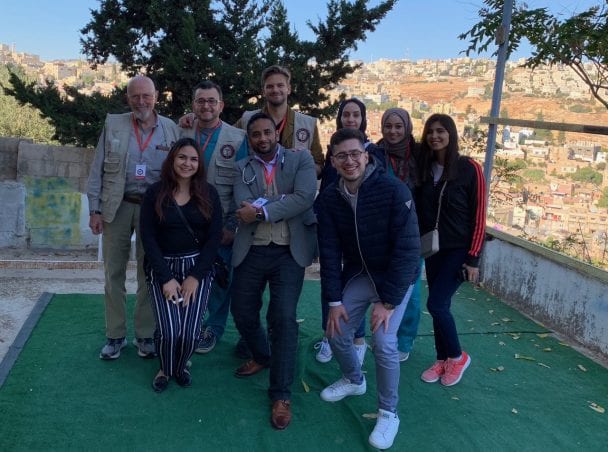 The moment Dr. Waseem Chaudhry examined a woman whose veins were protruding, filled with patches of yellow and red bumps because of her high cholesterol he knew he was far, far away from his Hartford office.

Dr. Chaudhry, a cardiologist at the Hartford HealthCare Heart & Vascular Institute, was in Amman, Jordan, as part of a team of 39 specialists offering free care through a mission trip organized by the Syrian American Medical Society (SAMS).

“We take things for granted,” he begins after returning from the six-day self-sponsored trip. “I had never seen anything like this before in my life. The skin manifestation of high cholesterol — you don’t see this sort of thing in real life in clinical practice in America.”

The woman, who had come in to see the dermatologist in the team, was eventually treated with cholesterol medication to help her condition after a consult with Dr. Chaudhry who treated her for “eruptive xanthomas,” a manifestation of very high cholesterol levels.

She was just one of about 150 patients Dr. Chaudhry and his partner cardiologist saw over the six days, ranging in age from a 1-month-old screened with a portable echocardiogram machine for cardiac birth defects to a woman in her 60s with severe aortic valve disease and unstable angina. In total, the entire team of physicians from across the world had 4,917 patient encounters.

“These are Syrian refugees, mostly women and children affected by the war in the Middle East,” Dr. Chaudhry says. “It was a very rewarding, eye-opening experience.”

The providers stayed two hours from the Syrian border. Every morning, he’d wake at 5, fill his box with cardiology medications, grab the portable echo and board a bus for the ride to the makeshift clinics close to Syrian border where he’d see patients nonstop until 5 p.m. They’d then return to their hotel two hours away for the night.

“We saw cases you only see in text books,”says Dr. Chaudhry. “There were two children with ventricular septal defects and one of them needs surgical closure. We plan to raise funds for him.”

One night during dinner, he received a text message from a doctor at the refugee camp about a young woman having a heart attack. He and his colleagues had her transferred so interventional cardiologists on the SAMS team could insert a stent in her heart.

While in Jordan, he saw multiple ways the stress of war could affect the human heart, including chest pains, heart attacks at very young age, cardiomyopathy, heart valve disease, and unstable angina. One woman came in with chest pains and they learned she had seen her three sons shot right in front of her.

“They’ve endured such devastation…. yet they were such thankful, patient, and lovely people,” he says. “They brought us gifts and were in high spirits.” The SAMS team leads medical and humanitarian missions across the globe and the next batch of physicians is already scheduled to see new patients and follow up on old ones in 3 months.

“There are three stages in a physician’s life”, Dr. Chaudhry quoting his senior physician friend, “learning, practicing, and giving back to the society to make a difference”. Dr. Chaudhry plans to continue to participate in humanitarian work and calls for health professionals and volunteers to take part in what likely can be a “life-changing experience, for self and for others”.